“Wyoming has the most freedom from paternalism, while New York is the most paternalistic state.” 50-state survey [Russell Sobel and Joshua Hall, Mercatus Center] From: “For Your Own Good: Taxes, Paternalism, and Fiscal Discrimination in the Twenty-First Century,” new Mercatus book on sin taxes edited by Adam Hoffer and Todd Nesbit.

Bob Kamman, Procedurally Taxing: “I searched other Tax Court orders and decisions available at the Court’s website. Surprisingly, this is the only reference to Jarndyce. I searched for Dickens. There were petitioners named Dickens, and petitioners with an address on Dickens Street. But the only other Dickens reference came from an opinion by the same Judge Holmes” [U.S. Tax Court Judge Mark Holmes, who has won praise for his writing style]. It was a quote from Tale of Two Cities about oppressive rural taxation:

[The town’s] people were poor, and many of them were sitting at their doors, shredding spare onions and the like for supper, while many were at the fountain, washing leaves, and grasses, and any such small yieldings of the earth that could be eaten. Expressive signs of what made them poor, were not wanting; the tax for the state, the tax for the church, the tax for the lord, tax local and tax general, were to be paid here and to be paid there, according to solemn inscription in the little village, until the wonder was, that there was any village left unswallowed. 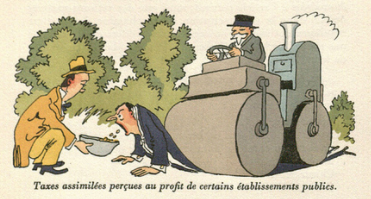 While expanding year by year, the complex of federal and state False Claims Act/whistleblowing laws often has exempted tax filings from the broad incentive provided to denounce others for “false claims” made to the government, often in a contract or program administration context. But new bills sponsored in the District of Columbia by Councilwoman Mary Cheh and in Michigan by Senator Steven Bieda would apply the bounty system to the tax area, starting, at least, with larger taxpayers. [Stephen P. Kranz, Diann Smith, and Eric Carstens, McDermott, Will, & Emery] We’ve covered some of the problems with laws rewarding tax tipsters in states like New York and Illinois here and here. On the latter story, note an update: a court has denied fees to attorney Stephen Diamond in a case in which he was both the relator and relator’s attorney. “Diamond has served as relator in about 1,000 qui tam actions over the last 15 years. A recent investigation by Bloomberg BNA revealed Diamond has collected almost $12 million through this pattern of litigation.” [Michael Bologna, BNA Daily Tax Report]

“A federal judge on Thursday ordered delivery giant UPS Inc. to pay New York City and the state nearly $247 million in damages and penalties for illegally shipping cigarettes” to New York buyers from Indian reservations. “UPS argued it followed the rules and can only do so much to police what its 1.6 million daily shippers send in sealed packages.” The delivery service says the shipments accounted for about $1 million in revenue. [AP/New York Post]

We’ve posted several times about federal tax authorities’ on-again, off-again use of private tax collectors on contingency fees to collect back taxes. As with other varieties of law enforcement for profit in which the middleman is enabled to keep residual dollars, the practice seems to encourage the taking of a hard line against taxpayers, especially when the private collectors can use tactics and methods forbidden to government agents. Now, after a hiatus, the IRS is returning to the use of private collectors, a change in law for which Sens. Charles Schumer (D-N.Y.) and Chuck Grassley (R-Iowa) apparently deserve much of the credit, if credit is the right word [Alex Richards and Brad Wolverton, NerdWallet, earlier]

The Treasury Inspector General for Tax Administration has released a new report on federal seizures of funds for the offense of unlawful bank “structuring” — the purposeful keeping of deposits or withdrawals below $10,000, a threshold that triggers reporting by the bank. The report confirms that in the great majority of cases, the funds being deposited or spent were not themselves associated with unlawful activity such as narcotics, tax evasion, or fraud. “The IG took a random sample of 278 IRS forfeiture actions in cases where structuring was the primary basis for seizure. The report found that in 91 percent of those cases, the individuals and business had obtained their money legally.” The seizure of legal source funds appears to have dropped sharply since the announcement of new policies by the IRS in 2014 and the U.S. Department of Justice in 2015. [Christopher Ingraham, Washington Post] Earlier on structuring here.

Caligula posted the tax laws in such fine print and so high that his subjects could not read them. Suetonius, The Twelve Caesars, bk. 4, para. 41 (Robert Graves, trans., 1957). That’s not a good idea, we can all agree. How can citizens comply with what they can’t see? And how can anyone assess the tax collector’s exercise of power in that setting? The Internal Revenue Code improves matters in one sense, as it is accessible to everyone with the time and patience to pore over its provisions.

In today’s case, however, the Commissioner of the Internal Revenue Service denied relief to a set of taxpayers who complied in full with the printed and accessible words of the tax laws. The Benenson family, to its good fortune, had the time and patience (and money) to understand how a complex set of tax provisions could lower its taxes.

And taking issue with the IRS Commissioner’s decision to disallow the use of two Congressionally approved devices, the Roth IRA and DISC (domestic international sales corporation), in a way said to trigger the so-called substance-over-form doctrine:

Each word of the “substance-over-form doctrine,” at least as the Commissioner has used it here, should give pause. If the government can undo transactions that the terms of the Code expressly authorize, it’s fair to ask what the point of making these terms accessible to the taxpayer and binding on the tax collector is. “Form” is “substance” when it comes to law. The words of law (its form) determine content (its substance). How odd, then, to permit the tax collector to reverse the sequence—to allow him to determine the substance of a law and to make it govern “over” the written form of the law—and to call it a “doctrine” no less.

Overlawyered gets a mention today in a New York Post editorial today, but the greater credit should go to Prof. Larry Tribe for his willingness to be swayed by the evidence on the Internal Revenue Service targeting controversy (earlier). In a Cato post largely adapted from previous coverage here, I note in a P.S.: “If word of the D.C. Circuit panel decision has not gotten around as widely as it should, one reason is that some major news organizations have still, nearly three weeks later, not seen fit to cover it.”