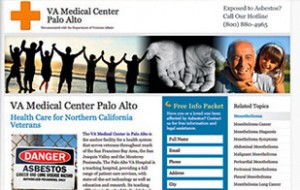 The sleaziest asbestos-suit-marketing practice yet? You decide. In what is unfortunately not an April Fool’s joke, Roger Parloff at Fortune exposes a network of client recruitment sites that would fool many casual visitors into thinking they are sponsored by the federal government’s Veteran’s Administration, under headings like “VA Medical Center Palo Alto” and corresponding domain names. A founding partner of well-known New York plaintiff’s firm Seeger Weiss expressed regret about his firm’s listing as a sponsor of the site. The full story is here (& welcome Legal Blog Watch readers).