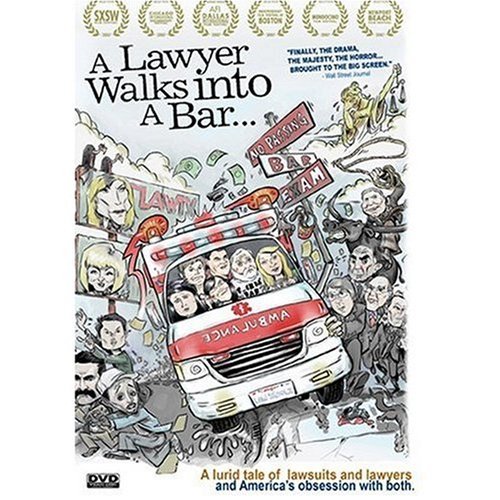 No, I still haven’t seen a copy of this documentary (Apr. 19), which has been getting rave reviews all over the place and is a new Ebert & Roeper weekly pick. It’s just out on DVD now, and available on Amazon, where it’s selling briskly. Here’s the New York Times’s review:

Writer-director Eric Chaikin’s feature-length documentary A Lawyer Walks Into A Bar. . . offers a witty, seriocomic look at myriad aspects of the American legal process and judicial system. It hones in on six individuals, all prospective attorneys at the time of the film’s production, and follows them through trials and travails as they approach and take the formidable bar. Chaikin then uses the subjects’ stories as springboards to broader digressions on U.S. litigation. The film features a myriad of celebrity guest appearances, from both well-respected attorneys and entertainers. Participants include: attorneys Alan Dershowitz, Mark Lanier and Joe Jamail; comics Eddie Griffin and Michael Ian Black; TV commentators John Stossel and Nancy Grace, and many others.

The producers interviewed me at length as part of their research in making the film, and they tell me that some of the resulting footage appears in the bonus tracks on the DVD. The film’s website is here. More: Above the Law, Robert Ambrogi’s LawSites, David Giacalone (scroll down), Suzanne Howe @ Counsel to Counsel.