Just out from Encounter Books, the cover art for my forthcoming book: 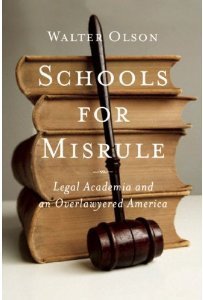 Apropos of which, one theme the book treats at length — the consequences and possible origins of today’s overwhelming liberal/Left ideological dominance in academic law — is the subject of Above the Law’s latest odd-trio matchup of Richard Epstein (at Ricochet), John Yoo (in comments there) and Elizabeth Wurtzel (on Twitter). Epstein:

…on average I would say that there are more left-wing democrats than center-left democrats [in legal academia]. I define the difference as follows. The former are those who have sympathy for programs of redistribution on such key areas as education and health care, but are by and large supportive of market institutions on the production side of the line. There is an effort to make good on the earlier social democratic tradition. The left democrats are in favor of a larger public sector and are deeply suspicious of markets more or less across the board. To put the point most vividly, the center left group is uncomfortable that Obama is too far to the left. The left liberal group is uncomfortable that he is too far to the right. There is a lot of difference there.

…conservatives, for good reason, tend to hide their political beliefs when they are on the job market and when they are untenured. They suspect, perhaps reasonably in light of this study, that there is a bias against them. I know conservatives at other schools who try to avoid writing on anything remotely controversial — this is bad for scholarship and teaching, because it discourages our best minds and fullest debates on the most important subjects.

Re liberal bias in academia: Shouldn’t the fact that intellectuals tend to be drawn to liberal ideas tell us that liberal ideas are smarter?

Well, no, as Hayek and many others have noted, it might just be that liberal/Left ideas unlike conservative ideas flatter intellectuals with the assurance that they deserve to run the world. Certainly — as I argue at more length in the new book — many of the liberal/Left ideas in circulation today promise to make legal academics a much more powerful and influential bunch.