Kevin Underhill, whose wonderful Lowering the Bar blog is often linked in this space, has a new book out on odd laws titled The Emergency Sasquatch Ordinance. Another of our favorite legal bloggers, Jim Dedman of Abnormal Use, has interviewed him about it and I was trying to decide which snippets to excerpt when I realized I liked the whole thing and should just ask to reprint it. So with Jim’s permission, here is the Abnormal Use interview with Kevin Underhill:

As lawyers, and denizens of the Internet, we have all received those crazy emails purporting to list strange and counter-intuitive laws. Usually, these emails forwards – traditionally sent by owners of AOL accounts – offer no effort to verify the existence of the laws cited therein (forcing us, if still interested, to turn to Snopes). Recently, Kevin Underhill, a legal humor blogger and partner at the San Francisco office of Shook, Hardy & Bacon L.L.P., has done what needed to be done: he researched all of these silly laws, sifted through the urban legends, and produced a book of unusual statues from both today and days of yore. As a lawyer himself, Kevin provided the citations to these laws, thereby proving that these laws actually did – or still do – exist. The result: The Emergency Sasquatch Ordinance,  a very amusing book published earlier this year by the American Bar Association. The book is named for a 1969 Skamania County, Washington ordinance proscribing “any premeditated, wilful and wanton slaying” of a Sasquatch, Yeti, Bigfoot, or Giant Hairy Ape.

In this mighty new tome, Kevin  alerts us to ancient laws once promulgated by the Greeks, Romans and other historic cultures. However, it’s the modern laws of our American states and localities which are the most amusing (and, of course, upon getting our hands on a copy of the book, we immediately flipped to the pages dealing with the Carolinas). From Kevin, we learn of South Carolina Code § 16-17-740, which makes it a crime to “sell or possess a novelty device commonly known as a ‘cigarette load’ which may cause a cigarette or cigar to blow up or explore after being lit.” Writes Kevin: “Information on the number of South Carolinians injured by cigarette loads over the years is difficult to come by, but I assume that the number is or was at one point substantial.” He also directs us to the South Carolina statutory prohibition on minors playing pinball and billiards (found in South Carolina Code § 63-29-2420 and 63-19-2430). Our favorite part: Pinball is banned outright for minors, but they can play pool with parental supervision or consent.). Again, writes Kevin: “The moral dangers of billiards and pinball themselves are not immediately apparent, although I notice that both involve physics and so maybe this open and scandalous display of ‘science’ is considered unseemly. Assuming that the danger arises from the kind of people who are (apparently) commonly found in these locations in South Carolina, we can conclude that pinball enthusiasts are considered a much greater threat, since youth pinball is illegal even with parental consent.” There must be something to this, as we also learn from Kevin that Alabama apparently bans secret passageways in its billiard halls.  (Paging Professor Harold Hill on this point.). Finally, we learn of 17 North Carolina Administrative Code 04B.0312, which provides that “[a] rattlesnake milking exhibition for which an admission fee is charged is subject to the gross receipts tax imposed under G.S. 105-37.1.” After noting that this provision was enacted “[d]espite the risk that rattlesnake milkers might fleet the state in protest,” Kevin informs us that “rattlesnake milking for charity is not taxed, however.” We wonder what happened in 2000 to require the this 1976 rattlesnake statute to be amended. Perhaps we’ll never know.

You get the idea. The book is full of these sorts of laws and Kevin’s witty commentary on them. As you can see, this is no dry enterprise; Kevin is a funny guy, and the book can be enjoyed by lawyers and non-lawyers alike. Of course, we already knew this fact as long-time readers of his law blog, Lowering the Bar, on which he also produces amusing content on a frequent basis.

As a part of this review, Kevin was also kind enough to agree to a brief email interview with Abnormal Use.

1. What has been the response of lawyers and legislators to the books?

Those who have read the book appear to like it very much, although that statement will be a little awkward if your review says it sucks. If that is the case, I would encourage all readers (and non-readers who have someone willing to read to them) to ignore that review and buy the book immediately. As far as legislators are concerned, I have heard that law-revision projects are now being carried out in almost every English-speaking country as a direct result of the book. But I would take that with a grain of salt since the only time I have heard that was just now when I said it out loud in my office.

2. Has there been any effort to repeal any of the current laws you identified in the book?

Other than the effort I just mentioned, not to my knowledge. I’d have expected at least the nuclear-armed-dairy-farmer lobby to have taken some action by now. Papua New Guinea did repeal the Sorcery Act last year, but I can’t take credit for that.

3.  Of all the modern laws you mention in the book, which is your favorite, and why?

It depends to some extent what you mean by “modern.” The Guano Islands Act of 1856 is one of my favorites and is still on the books, but it hasn’t been used in a while. I am a big fan of the Brazilian law that requires cell-phone companies to give a discount to people who stutter, and the surprisingly prevalent 316-word definition of “buttocks.” And just because they have popped into my head right now, I will also mention the state laws saying that a “riot” can include as few as two people (except in Alaska, where it takes six to riot).

Probably not, if only because the efforts to turn this into a class action are likely to fail. Everyone who cancels a taco order has his or her own individual reasons for doing so. It’s not something that can be determined on a class basis. Except possibly in California, which is good news for me.

By the way, the image depicted at the top of this post is not the actual cover of The Emergency Sasquatch Ordinance. Rather, it is a carefully constructed recreation of said cover by GWB associate and Abnormal Use blogger Batten Farrar. We were inspired by a previous recreation of the cover which Kevin Underhill posted on his Lowering The Bar blog back in early March. You can see that post here. The actual cover to Kevin’s book is here: 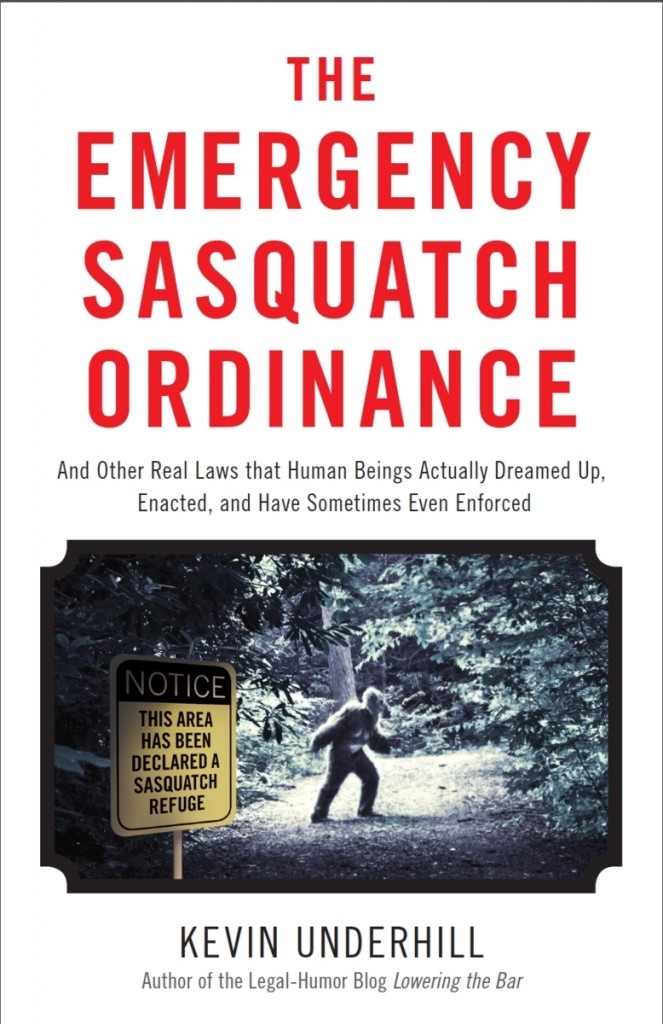