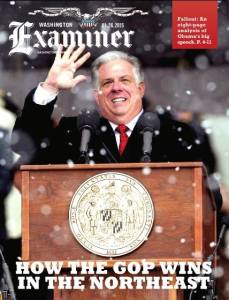 I wrote the cover story in this weekend’s Washington Examiner magazine, about why the Northeast continues to elect Republicans as governor (and not to many posts other than that). The cast of characters includes newly elected governors Larry Hogan of Maryland and Charlie Baker of Massachusetts, Thomas Dewey, Chris Christie, Rudy Giuliani, William Weld, George Pataki, Mitt Romney, and Christine Todd Whitman.

It’s a particular honor that political analyst Michael Barone wrote a piece riffing on my article and going into more detail about the reformist origins of the GOP tradition in states like New York, and its continued importance as a brake on both self-dealing and fiscal profusion:

Why have Northeastern electorates, so heavily Democratic in presidential and congressional elections, been willing to elect Republican governors so often? Because that’s the only way to prevent their heavily Democratic legislatures from taxing and spending their states onto the road to bankruptcy for the benefit of the public employee unions. That’s something that Thomas Dewey, a light spender unlike Rockefeller, would approve and understand.

Most of my essay is about politics and policy, but here’s a bit related to law:

Northwestern law professor and Federalist Society member John McGinnis says [New York Gov. George] Pataki’s “most impressive act” was one that was hardly noticed at the time and yielded no electoral benefits, namely his appointment to the state’s highest court of Robert Smith, who “became one of the great state court jurists of his time.”

More on that: Ira Stoll. I blogged a bit more about Gov. Larry Hogan’s victory in my election night post, and much more at my Maryland blog Free State Notes.