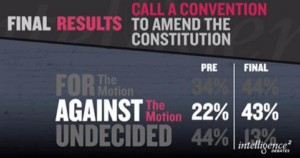 Last Wednesday I had the pleasure of appearing at the Intelligence Squared debate series before a New York audience on the topic: “Call a Convention to Amend the Constitution.” Under the series rules, whichever side advances its audience approval ahead more from the original baseline wins. Over the course of the debate, our negative side advanced our side by 21 points, compared with 10 for the affirmative of Prof. Larry Lessig and Mark Meckler. The IQ2 hosts congratulated us on a convincing victory (my ally was Prof. David Super). Probably the only time in my life a camera has caught me doing a high five!

The debate page includes a live transcript of the event, research papers and other resources. The IQ2 series also has selected several clips of highlights of the debate including this one on whether small and large states would have the same vote at a convention. The 2012 Mike Rappaport paper for Cato that I refer to in my closing remarks is here, and I’ve covered Article V convention proposals here and here (and more generally.)

Filed under: Article V, live in person, on TV and radio