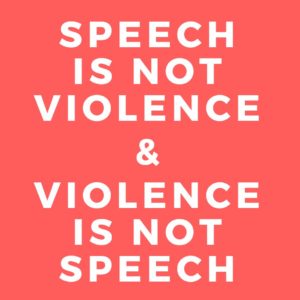 From Matt Enlow on Twitter, in response to my request:

Not only did I put it to use as a avatar, but so did two of the staunchest free-speech advocates on Twitter, Popehat and Christina Hoff Sommers.

I’ve noticed that many who seek to blur the speech-violence distinction believe that doing so will enable more effective social disapproval of hurtful speech. But perhaps its more salient effect is to undermine the basis for drawing lines against frank violence of action, as is already happening.