“The Latest On Occupational Licensing Reform: At the federal level and in the state of Michigan, there have been encouraging moves toward market liberalization.” [Thomas A. Hemphill and Jarrett Skorup, Cato Regulation mag] Related: George Leef, Regulation (reviewing “Bottleneckers” by William Mellor and Dick M. Carpenter II). “Florida Lawmakers Are Fast-Tracking Licensing Reforms” [Boehm] “But sadly Elias Zarate is no closer to being a barber, because he still doesn’t have a high school diploma. And, yes, that matters for some reason.” [same] “Inside the Insane Battle Over Arizona’s Blow-Dry Licensing Bill” [same] “Tennessee has imposed nearly $100K in fines for unlicensed hair braiding since 2009” [Debra Cassens Weiss, ABA Journal] Licensing bars on applicants with criminal histories, often related hardly at all to the risks of crime in licensed occupations, make re-entry of offenders harder [Arthur Rizer and Shoshana Weissmann, The Blaze] A Twitter thread on board certification of music therapists, which are licensed in 10 states [Shoshana Weissmann et al.] Study: “optician licensing appears to be reducing consumer welfare by raising the earnings of opticians without enhancing the quality of services delivered to consumers.” [Edward J Timmons and Anna Mills, Eastern Economic Journal]

A small town in the Florida Panhandle has long tried to live down its special place in the history of insurance fraud. “By the time the early 1960s rolled around, according to the Tampa Bay Times, Vernon, Florida was responsible for roughly two-thirds of all loss-of-limb-related insurance claims in the United States.” I’ve written on the story a number of times, and Dan Lewis of the oft-recommended-here Now I Know website penned this account in 2012 which I seem to have overlooked at the time, an omission I remedy herewith.

“A 54-year-old Florida woman was arrested Sunday after she was caught stealing cement pavers from a home in Port Richey….Upright said she thought they were trash. Deputies said she then threatened to sue the owner because she hurt her back on his property while loading the blocks into her vehicle.” The homeowner said the 42 decorative blocks, worth an estimated $420, were being stored not far from the roadway as part of a remodeling project. [WFLA]

Federal judges have fined the Jacksonville law firm of Farah & Farah $9.1 million over improperly handled claims against a fund set up after litigation to compensate smokers in the state of Florida [WTLV/First Coast News]:

The judges’ order states 1,250 frivolous tobacco claims were filed by Farah & Farah and the Wilner Firm against the Engle Trust Fund….

The investigation revealed some cases filed by the attorneys were for deceased clients, non-smokers, those who did not suffer from one of the required diseases, and 572 that did not authorize the attorneys to file lawsuits on their behalf. 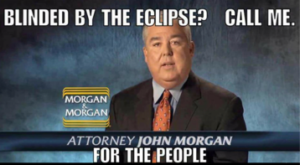 Florida: “someone set up a handful of social media accounts criticizing the City of Coral Gables for its use of private security guards. … So in late May, deputy city attorney Miriam Ramos fired off two cease-and-desist letters and sent them to Silicon Valley, threatening to fine Facebook and Instagram $500 a day if they didn’t remove the posts, which Ramos said infringed on the city’s trademarks. Now, the city is suing Mark Zuckerberg’s multibillion-dollar businesses in an attempt to get the name, phone number, and address of whoever ‘cast the city in a false light.'” While cities can own trademarks, as in the slogans and logos used in marketing campaigns, courts are likely to accord broad recognition to fair use of those marks in discussions of civic affairs. Can cities sue over false light at all? [Jessica Lipscomb, Miami New Times; Lance Dixon/Miami Herald]