Lawyers and law profs are ginning up theories to sue for discrimination when individuals turn down AirBnB renters [Washington Post; related on AirBnB yielding to pressure to toughen anti-discrimination rules]

Some localities intent on regulating room sharing don’t seem fully aware that “federal law — specifically CDA 230 — prevents any laws that look to hold internet platforms liable for the actions of their users.” While that law does not prevent cities from aiming regulations at their own residents, it means they might not have the authority to assign liability to platforms such as AirBnB for residents’ failure to comply. [Mike Masnick, TechDirt; G.S. Hans, CDT]

He came to stay: “A Telegraph Hill resident who was squabbling with his building co-owners allegedly duped them into renting him their unit by using a false identity on Airbnb, according to a complaint filed in San Francisco Superior Court. Then, after two months in the apartment, he claimed he qualified for tenants’ rights and said he planned to stay indefinitely.” [San Francisco Chronicle, earlier in series]

Washington, D.C.: a pending council bill on AirBnB and similar arrangements, “backed by a large hotel workers union, would ban the rental of whole units without the owner or occupant being present, and prevent hosts from renting out more than one unit at a time. It would also create a special enforcement division within the District’s Department of Consumer and Regulatory ­Affairs to conduct inspections, and empower third parties — such as neighborhood groups or housing affordability advocates — to sue for violations.” Hotel owners have their own, “less draconian” scheme to restrict AirBnB use in the popular tourism city. [Lydia DePillis, Washington Post “WonkBlog”] 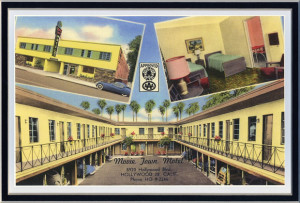 In Los Angeles v. Patel, decided this morning, the Supreme Court held 5-4 with Justice Kennedy joining the four liberals that a Los Angeles law requiring hotels to give police free access to guest registries was facially in violation of the Fourth Amendment because it did not provide a way for hotels to challenge a given disclosure. Justice Sotomayor wrote the majority opinion. Cato had filed an amicus brief on behalf of the position that prevailed. Earlier here. Pictured postcard via present-day Vibe Hotel. More: Josh Gerstein, Politico; Jim Harper, Cato.

More from Conor Friedersdorf: Justice Scalia in dissent focused on the historically closely regulated nature of innkeepers, but would he feel as comfortable if technological advance turned the hotel registries into an instantly accessible government database of where all travelers are staying, a development lawyers for Los Angeles appeared to view as perfectly Constitutional?

A new study indicates that “a 30% rise in the minimum wage means that 1 million people lose either their jobs or even the opportunity to work.” [Tim Worstall, James Pethokoukis] This and all other studies should be taken with caution, of course: “[We’ve] been talking about [it] confidently, as if we know for sure what will happen when these laws take effect. In fact, it’s very hard to study what happens when we raise the minimum wage.” [Megan McArdle] David Henderson on sneakily pro-union Los Angeles hotel minimum wage enactment [EconLib] Donald Boudreaux corrects The Guardian [Cafe Hayek] And Borderlands Books in San Francisco, threatened with closure after the city’s electorate voted in a minimum wage increase, may survive if it can get enough fans and customers to cover some of its costs in a sponsorship plan.