“A libertarian attorney filed a lawsuit on Thursday taking aim at the Louisiana State Bar Association’s monopoly on the legal profession, joining a wave of similar litigation in other states. New Orleans insurance defense lawyer Randy Boudreaux alleges in the federal court suit that his rights of free speech and free association are being violated because the bar association collects his mandatory dues while taking positions on controversial issues like the death penalty and LGBT rights…. Boudreaux, a married gay man, said he agrees with the bar association’s position in favor of LGBT rights. But he’s opposed to the idea of compelling his fellow lawyers to pay for a group with which they disagree.” [Matt Sledge, NOLA.com, earlier] But note: Eighth Circuit rejects argument that North Dakota bar fees are open to challenge under Janus [Fleck v. Wetch]

“A judge in Oklahoma on Monday ruled that Johnson & Johnson had intentionally played down the dangers and oversold the benefits of opioids, and ordered it to pay the state $572 million.” The state had asked for $17 billion. [Jan Hoffman, New York Times and sidebar on why J&J, the deepest pocket, was the only defendant left standing in the Oklahoma case; opinion; Paul Demko, Politico; Lenny Bernstein, Washington Post] Caleb Brown interviewed me for the Cato Daily Podcast:

For other skeptical views of the case, see Daniel Fisher, Legal NewsLine (“J&J had about 3% market share, sold abuse-resistant drugs, and Oklahoma didn’t present evidence of a single doctor who was misled by its marketing.”) and followup (problems with state’s legal theory), Jeffrey Singer/Cato, and Jacob Sullum, Reason (sweeping definition of public nuisance) and followup (other problems). [More: Jonathan Turley]

Particularly worth noting is Jacob Sullum’s account of the logical path traced by Judge James Hill in North Dakota in recently dismissing a suit against Purdue Pharma:

One of the claims against the company involved a public nuisance statute very similar to Oklahoma’s. Hill noted that “North Dakota courts have not extended the nuisance statute to cases involving the sale of goods.” He cited a 1993 case in which the Tioga Public School District #15 of Williams County, North Dakota, argued that the sale of acoustical plaster containing asbestos qualified as a public nuisance.

The U.S. Court of Appeals for the 8th Circuit, which handled the case because it involved an out-of-state defendant, observed that “North Dakota cases applying the state’s nuisance statute all appear to arise in the classic context of a landowner or other person in control of property conducting an activity on his land in such a manner as to interfere with the property rights of a neighbor.” The 8th Circuit worried about the consequences of venturing beyond that “classic context”:

To interpret the nuisance statute in the manner espoused by Tioga would in effect totally rewrite North Dakota tort law. Under Tioga’s theory, any injury suffered in North Dakota would give rise to a cause of action under section 43-02-01 regardless of the defendant’s degree of culpability or of the availability of other traditional tort law theories of recovery. Nuisance thus would become a monster that would devour in one gulp the entire law of tort, a development we cannot imagine the North Dakota legislature intended when it enacted the nuisance statute.

Hill said he “agrees with the reasoning of the Eighth Circuit in Tioga.” As in that case, he said, the state in its lawsuit against Purdue was “clearly seeking to extend the application of the nuisance statute to a situation where one party has sold to another a product that later is alleged to constitute a nuisance.” Hill added:

The reality is that Purdue has no control over its product after it is sold to distributors, then to pharmacies, and then prescribed to consumers, i.e. after it enters the market. Purdue cannot control how doctors prescribe its products and it certainly cannot control how individual patients use and respond to its products, regardless of any warning or instruction Purdue may give.

Judging from the cases cited by Judge Balkman, Oklahoma courts have not read that state’s nuisance law to cover situations like this either—until now.

How efficient is social media in spreading viral-junk misinformation about the law? Well, the following post about Tuesday’s two-page Supreme Court ruling in Brakebill v. Jaeger, a case about voting procedures in North Dakota, has gotten more than 18,000 shares as of this morning: 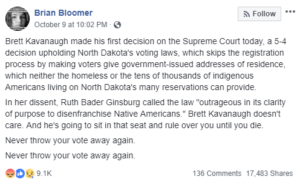 Let’s take a look at its errors, or at least the first four biggies:

1. Brakebill was not Justice Kavanaugh’s first ruling. If you so much as glance at the Court’s opinion, it’s hard to miss its second sentence: “JUSTICE KAVANAUGH took no part in the consideration or decision of this application.”

2. There is no indication that the vote was 5 to 4. Liberal Justices Sonia Sotomayor and Stephen Breyer did not join the dissent.*

3. Justice Ginsburg’s dissent contains no language even remotely like that put within quotation marks here. Her tone is technical rather than indignant, and she does not challenge anyone’s motives as illegitimate.

4. The Court did not issue a decision upholding the laws. It was a denial of an application to vacate a stay, not a ruling on the merits.

And we haven’t even gotten to the merits! Three and a half days after posting, its author has not seen fit to correct any of his errors.

Here’s a rule of thumb about social media: the more anger, the less accuracy. More on viral junk and thinking before you share here.

* A reader on Twitter points out that in the absence of a signed majority opinion, we can’t know for sure that the vote against vacating the stay necessarily came out 6-2; we know only that if there were other Justices who wanted to vacate the stay, they declined to join the Ginsburg-Kagan dissent. I’ve corrected the text above accordingly.

Via Eugene Volokh, the Eighth Circuit has ruled [Hiltner v. Owners Insurance Co.] that a North Dakota trial court improperly assigned a heightened duty of care to a driver following an accident on the grounds that she had been a designated driver at a social outing. Noting contrary rulings in several jurisdictions, it ruled that North Dakota law would not impose such a heightened duty: as a Tennessee court observed in 2008, “[t]o hold a driver liable for the irresponsible actions of an intoxicated passenger would cut against this important social policy of encouraging the use of designated drivers.” More: T. Thomas Metier, Northland Injury Law.

Also, note the ambiguity of the next line, “Members of the newly formed club said that despite having no pointed tips or sharp blades, the school classifies the club’s equipment as weapons.” It sounds as if the school administration itself is being described as “having no pointed tips or sharp blades,” which might be a version of “not the sharpest knife in the drawer.”

More: Scott Greenfield, who has a family connection with the sport of fencing.

Would that other newspapers were as forthright as calling for an end to “policing for profit” as the Grand Forks Herald. North Dakota is already considered to be one of the states that does best at curbing the abuse of civil forfeiture; adjoining Minnesota does less well.