Two big stories yesterday at the Supreme Court about the much-contested crossroads of discrimination law and religious exemption. In one, the Court “agreed to review a challenge to Philadelphia’s policy of excluding Catholic Social Services from its foster care system because of its refusal to place children with same-sex couples.” It’s not quite the case some readers will expect, though:

Note that Philadelphia was enforcing a local ordinance of its own making; the case is thus on a very different footing than if it were, say, a challenge to the Obama-era regulations (which HHS has since proposed to rescind) that tried to arm-twist all states and cities into adopting policies like Philadelphia’s. In the HHS episode, it was the liberal side of the controversy that was trying to impose a uniform standard from coast to coast; in this case, it is some conservative religious groups that hope to do that. Scott Shackford has more in a piece at Reason quoting my views, as does the Christian Science Monitor in a piece last week.

In the other case, Justice Samuel Alito, joined by Justices Clarence Thomas and Neil Gorsuch, called on the Court to revisit a 1977 precedent in which it interpreted federal employment discrimination law so as not to require employers to accommodate workers’ religious beliefs if doing so would involve more than de minimis cost or disruption. Back then, it was mostly liberals who wanted a standard less favorable to employers than that; since then many liberals and conservatives have swapped places on the issue. The full piece is here.

If you missed my Wall Street Journal piece on how the Michigan foster care decision isn’t really much of a victory for religious accommodation, Cato now has posted an unpaywalled version. Earlier discussion here.

I’ve posted before about our July Cato conference on adoption, pluralism, and children’s interests. Now Cato’s bimonthly Policy Report has published highlights of the panel on anti-discrimination law and religious agencies, with speakers including Stephanie Barclay of BYU, Sarah Warbelow of the Human Rights Campaign, Robin Fretwell Wilson of the University of Illinois, and me.

One of my comments about pluralism and freedom in the system: “When I began reading about adoption, I realized for about the umpteenth time how glad I was to live in America.” Not that the system isn’t full of problems: on the grueling 26-year litigation in the New York City foster care case, Wilder v. Bernstein, see this 2011 piece of mine.

More kids find homes when government doesn’t stand in the way: videos are now online from Thursday’s successful Cato adoption conference. They include a first panel on discrimination law and religious agencies:

And a final panel on policy obstacles to adoption.

I figure in all three sessions, in the first as introducer/panelist and in the other two as moderator.

Three years ago I took a critical view of the trend in many states and cities toward excluding from publicly funded adoptive placement of kids in public care relatively conservative religious agencies that decline to handle placements to families outside their belief group, to non-traditional families such as same-sex couples and single parents, or both. In recent years the ACLU and like-minded groups have stepped up the pressure with lawsuits in states like Michigan aimed at excluding these groups from access to public money unless they take all kinds of families.

Now a bill called the Child Welfare Provider Inclusion Act (H.R. 1881/S.B. 811), passed by the House of Representatives as a rider on the pending Labor/HHS appropriations bill, would prohibit states from taking adverse action against foster care and adoption agencies on the grounds that they refuse to engage in referrals, placements or other services that conflict with their religious or moral convictions. States found to have violated the rule would be subject to loss of 15 percent of their federal child welfare funding. The rule broadly prohibits “discriminating or taking an adverse action against” agencies and would give agencies broad legal remedies including attorneys’ fees.

I haven’t had a chance yet to review all the details of the bill, which in any case would need approval of the Senate and President before becoming law. The Ethics and Religious Liberty Commission of the Southern Baptist Convention (ERLC) and U.S. Conference of Catholic Bishops have papers in favor of the measure and Human Rights Campaign against.

In the mean time a well reported, balanced piece by Gillian Friedman on the controversy mentions tomorrow’s (Thursday’s) Cato conference in D.C. on adoption policy [Deseret News; more/related, Bobby Ross, Jr., Religion News Service in March] The panel on this subject leads off the conference, and includes Assistant Professor Stephanie Barclay of the J. Reuben Clarke School of Law at Brigham Young University; Sarah Warbelow, Legal Director at the Human Rights Campaign; Prof. Robin Fretwell Wilson of the University of Illinois College of Law; and me.

The four liberal justices dissented, but did not agree on reasoning. Breyer and Kagan went for a low-key, minimalist fix — keep the injunction in place while ordering additional factfinding about implementation — that might have begun as an effort to craft a narrow decision conservatives would join. Only two Justices, Sotomayor and Ginsburg, went along with the arguments that persuaded the Ninth Circuit judges below.

Both dissents, however, stressed the significance of improper animus / discrimination against religious belief, the same issue championed by the Court’s conservatives in Masterpiece Cakeshop earlier this month.

Legal buffs may be interested in Thomas’s concurrence in which he pronounces universal injunctions “legally and historically dubious.”

The podcast above with Caleb Brown and Ilya Shapiro is at this link. Earlier here and here. Other views: Eugene Volokh, Ilya Somin. More: Roger Pilon.

Bay View, Michigan, is one of many Methodist-founded resorts from the Chautauqua tradition, among the better-known of which are the ones at Ocean Grove, N.J. and Chautauqua, N.Y. Now it is the target of an ACLU-backed lawsuit claiming that its bylaws, which permit only “practicing Christians” to own property, are unlawful. One of the claims in the lawsuit is that Michigan cannot properly under the First Amendment delegate certain public services, like those of a police force, to the association within its boundaries. But (I’m quoted as saying) as recently as 2002 a court ruled that it was not improper for a Christian college in Michigan to have police powers delegated to it for campus security, even though the college, like Bay View, was under bylaws requiring that it be controlled by religious believers. A second claim in the lawsuit, invoking the federal Fair Housing Act, may have a clearer path forward, because courts have been inclined to read narrowly rights of autonomy of religious institutions, especially entities like Bay View that are not as closely tied to church functions as those of, say, a monastic retreat might be. Tracy Schorn, DC_Bar]

My parting shot: “Certainly, Bay View is out of step with modern sentiment, and I can’t predict to what extent the courts will tolerate that. I will say this, however: If the courts turn Bay View into just another secular homeowner’s association, the result will be not more but less diversity overall in Michigan and in resort options.” [ 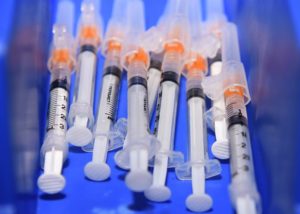 “A longtime employee of Consol Energy Inc. is entitled to over half a million dollars in damages because of the coal company’s failure to accommodate his religious concerns about a handprint scanner, the 4th U.S. Circuit Court of Appeals ruled….[Beverly Butcher Jr.’s] understanding of the biblical Book of Revelation is that the ‘Mark of the Beast’ brands followers of the Antichrist, allowing the Antichrist to manipulate them. The use of Consol’s hand-scanning system, Butcher feared, would result in him being so marked. Butcher believed that, even without any physical or visible sign, his willingness to undergo the scan could lead to his identification with the Antichrist.”

The federal Equal Employment Opportunity Commission took Butcher’s side against the company. “At trial, the jury returned a verdict in favor of the EEOC. Butcher was awarded $150,000 in compensatory and punitive damages. The court also awarded Butcher $436,860 in front and back pay and lost benefits.” [Jeffrey Rhodes, SHRM; Dawn Solowey, Seyfarth Shaw; EEOC v. Consol Energy]