The panics over salmonella, E. Coli and unsafe foodstuffs from China have heightened the prospects that Congress will enact a measure known as H.R. 875, the “Food Safety Modernization Act of 2009”. 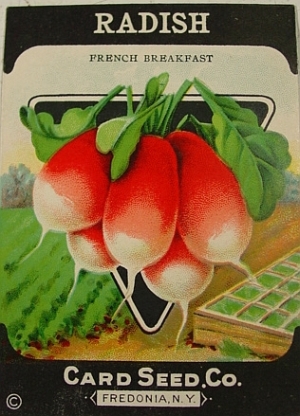 Should the measure in its current form become law, “food establishments”, which to quote Patrick at Popehat “means anyone selling or storing food of any type for transmission to third parties via the act of commerce”*, will have to register with a new federal regulatory agency, submit to federal inspections, and, perhaps most significant, keep “copious records of sales and shipment by lot and label”. Penalties for infractions will be very, very steep.

What could possibly go wrong?

The answer, it seems, is “plenty”. Patrick, and the other writers linked just above, warn that the law may drive out of business local farmers and artisanal, small-scale producers of berries, herbs, cheese, and countless other wares, even when there is in fact nothing unsafe in their methods of production. Many informal makers of ethnically or culturally distinctive food items will go off-books or simply fall by the wayside, overwhelmed by the reporting and batch-tracking paperwork. Many foreign producers who ship in less-than-mass quantities will give up on the U.S. market rather than try to comply with challenging standards that differ drastically from those imposed by European markets or their own countries of origin, which in turn will mean that many interesting and safe specialty foods will simply no longer be available for purchase, at least legally.

The catch-phrase one keeps hearing is “CPSIA for food”.

So now an aggressive campaign of reassurance is underway: FSMA, it’s said, really should be seen as posing no particular threat to farmer’s markets or small producers — at least those that are not sloppy or cavalier about their customers’ safety.

At Treehugger, one finds language which with a word changed here or there is virtually identical to the reassuring language one recalls hearing from CPSIA backers:

I can’t imagine this resulting in anything more than a little paperwork and a brief headache for small farmers—they have no reason to worry about a seven figure fine. That amount is intended to account for corporate ne’er food-do-wells, and is therefore a pretty damn good incentive to keep factories and meat packing plants clean.

So even though home orchard proprietors and others operating at far less than a factory scale of production will in fact be exposed to stiff fines should they fall astray of the record-keeping obligations, this particular writer, Brian Merchant, “can’t imagine” stiff fines actually being imposed. You have to wonder whether Mr. Merchant was one of those who as recently as January couldn’t imagine CPSIA posing more than a “brief headache” for thrift stores or handmade toy crafters.

Among those prominent in this campaign of reassurance is the ubiquitous and media-friendly plaintiff’s lawyer Bill Marler, who’s carved out a thriving practice filing (and publicizing) food poisoning suits. Marler’s blog serves as a bit of a clearinghouse for articles vigorously disputing the idea that small producers have any reason, any good reason at least, to be afraid of H.R. 875.

The chief sponsor of FSMA’s Senate version is none other than Illinois Sen. Dick Durbin, and among the groups prominently backing the bill is none other than Consumers’ Union. We are now being asked to trust a legislative process in which Durbin and CU will count as insiders to ensure that the law’s provisions are shaped so as not to pose an undue or prohibitive burden on small producers far from the Washington scene. If there was ever a time when I would have trusted Sen. Durbin and Consumers’ Union with such a task, it was before the CPSIA debacle. Not only did the Durbins and CUs of the Washington scene help bring us that debacle, but — much less forgivably — they have continued blindly or mendaciously to deny that there is anything that needs fixing about that law at all, even as its damage has mounted month upon month. They do not deserve our trust on this matter.

Some other views: Slow Food, Ari LeVaux/AlterNet (noting that an alternative bill, HR 759, the “Food And Drug Administration Globalization Act,” may be more likely to pass and poses many of the same issues), Farm-to-Consumer Legal Defense Fund (oriented toward raw milk defense), Nicole Brodeur/Seattle Times (pooh-poohing concern over H.R. 875, but acknowledging the legitimacy of similar concerns that the animal-tracking program NAIS will render small animal-keeping operations uneconomic). Another source: Twitter hashtag #HR875.

More: & welcome Andrew Sullivan, Eve Tushnet, Hans Bader, Rob Wilson/Challenge and Fun, John Phipps/Incoming readers. And more from the “campaign of reassurance” camp: Hartford Courant (citing views of bill sponsor Rosa DeLauro, D-Ct.); Ryan Grim at Huffington Post (similar); Factcheck.org (criticizing untruths and hyperbole about the bill found in a widely circulated chain email, and seeming to guide readers to the Snopes-like conclusion that concern about the bill can therefore be dismissed). John Cole/Balloon Juice initially agrees in finding grounds for concern, then is convinced by commenters (who warn him against wicked, untrustworthy sites like this one) that it’s all “hysterical” and “nonsense”. More reactions: Patrick @ Popehat, Rod Dreher, Nick Gillespie @ Reason “Hit and Run”, Hans Bader and more, Vines and Cattle.

*Some reasssuring accounts of the law describe it as applying only to food in “interstate commerce”, which sounds as if it might not reach local and mom-and-pop operators at all; but the law’s definition of “interstate commerce,” as readers may remember, can include extremely localized doings, as in Wickard v. Filburn (farmer’s growing of wheat for his own consumption deemed “interstate commerce”). Section 406 of the bill reads as follows: “PRESUMPTION. In any action to enforce the requirements of the food safety law, the connection with interstate commerce required for jurisdiction shall be presumed to exist.”