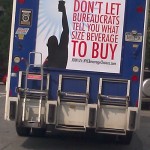 Related: “Soda Noir,” Owen Smith’s funny cover illustration for the June 18 New Yorker. And George Will reveals in his column that as part of its stimulus program the federal government spent millions of dollars on campaigns at the local and state level to crack down on sweetened drinks, a policy of dubious legality given that existing law “prohibits the use of federal funds ‘to influence in any manner … an official of any government, to favor, adopt, or oppose, by vote or otherwise, any legislation, law, ratification, policy, or appropriation.'” [earlier here, here]