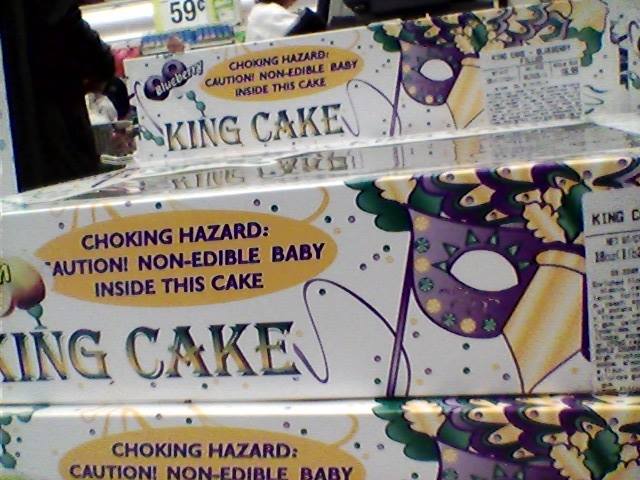 Photo via David Boaz. We’ve been covering the Mardi Gras King-cake-figurine-liability issue at Overlawyered for years.

More than a thousand local businesses have sprung up following California’s legalization of at-home foodmaking for sale. One of them is Mark Stambler’s reopened Pagnol Boulanger, which authorities had raided and shut down the day after the Los Angeles Times profiled its French bread. [Nick Sibilla, Forbes] Effort underway to expand cottage food law in Virginia [Baylen Linnekin]

Chefs “hate” the idea of using gloves or tongs on everything, says the L.A. Times, and the epic volume of plastic disposables that will have to be run through daily will make a bad joke out of the bag bans popular in the state, but the legislature was unswayed:

Gov. Jerry Brown signed legislation that made changes to the California Retail Food Code in an effort to curtail foodborne illnesses, and those changes include a law that says “food employees shall not contact exposed, ready-to-eat food with their bare hands.”

That means cooks must wear single-use gloves or use utensils when handling food such as sushi, bread, fresh fruit and vegetables and any cooked components of dishes that will be plated for customers.

California-Crazy: New law requires bartenders to wear gloves or use tongs while adding drink garnish – plus all chefs http://t.co/P75vAHkLzK

"I bet it’s three months before a glove shows up in a salad." The end of the cooking craft is nigh: http://t.co/bc61JwLFom

Not a good idea. Wearing gloves is a crutch to washing hands and being sanitary. http://t.co/moJfCnhQnf

You're going to eat raw fish, and you're worried about what's on the chef's hands? http://t.co/J3Yhy3fiSP

P.S. Cookery writer Michael Ruhlman has more to say here (“at any busy restaurant, my experience has been that the cooks’ hands are the cleanest in the place. You’re more likely to pick up germs from the waiter’s hand that sets your plate before you — but you don’t hear the legislators clamoring for this.”)

Two of my enduring interests — excessive government regulation and the quest for truly scrumptious cinnamon buns — intersect here in a single story from Denmark. [Guardian]:

…scientists have now discovered that too much of the most commonly used type of cinnamon, cassia, can cause liver damage thanks to high levels of coumarin, a natural ingredient found in the spice.

The EU has accordingly decreed that coumarin levels must be kept below 50 mg per kg in “traditional” or “seasonal” foodstuffs eaten only occasionally, and 15 mg per kg in everyday “fine baked goods.”

Last month, the Danish food authority ruled that the nation’s famous cinnamon swirls were neither traditional nor seasonal, thus limiting the quantity of cinnamon that bakers are allowed to use, placing the pastry at risk – and sparking a national outcry that could be dubbed the great Danish bake strop.

The president of the Danish Bakers’ Association, Hardy Christensen, said: “We’ve been making bread and cakes with cinnamon for 200 years. Then suddenly the government says these pastries are not traditional? I have been a baker for 43 years and never come across anything like this – it’s crazy. Using lower amounts of the spice will change the distinctive flavour and produce less tasty pastries. Normally, we do as we’re told by the government and say OK, but now it’s time to take a stand. Enough is enough.”

Apparently following a complaint from a local restaurateur, provincial authorities have cracked down on a pay-what-you-can informal supper club organized by High River resident Paula Elliot. “AHS shut her down … informing her they don’t approve of people sharing food. They were equally heavy handed when she tried to give away edibles to stranded flood refugees at evacuation centers.” [Jen Gerson, National Post]