The urge to regulate distracted driving could reach down into your smartphone [Katherine Mangu-Ward, Reason; Marc Scribner, CEI]

“…whether you want one or not.” [Zenon Evans, Reason, earlier here and here] Congress mandated in 2007 via the Cameron Gulbransen Kids Transportation Safety Act — remember, laws named after victims are usually bad laws — that the National Highway Traffic Safety Administration, or NHTSA, develop rules mandating such cameras in order to reduce the rate at which drivers backing up inadvertently run over persons behind them, sometimes their own infant family members. It delayed doing so, in part, because of the regulation’s exceedingly high cost — $2.7 billion by one estimate — and because the estimated ratio of lives saved to costs inflicted fell well below the agency’s own standardized threshold for action. Still, the text of the law forced its hand.

My Cato colleague Peter Van Doren, editor of Regulation, notes that “in this case, NHTSA was responding to its own analysis that determined (p. 143) that driver error is the major determinant of the effectiveness of backup assist technologies including cameras.” Former regulatory oversight director Cass Sunstein, at Bloomberg View, offers a view somewhat more sympathetic toward the regulation.

By making cars materially more expensive, the rule will make it harder for many poorer households without cars to graduate to car ownership. A new Urban Institute study by Rolf Pendall, Evelyn Blumenberg, and Casey Dawkins tends to reinforce the intuitively plausible notion that wage earners who succeed in acquiring cars have significantly better chances of making economic progress:

Housing voucher recipients with cars tended to live and remain in higher-opportunity neighborhoods — places with lower poverty rates, higher social status, stronger housing markets, and lower health risks. Cars are also associated with improved neighborhood satisfaction and better employment outcomes. Among Moving to Opportunity families, those with cars were twice as likely to find a job and four times as likely to remain employed.

Since poverty takes a toll in health and life expectancy, safety-enhancing mandates that drive up the price of cars have negative as well as positive health impacts.

“As a big employer that the government made a big bet on, ‘GM starts off in a position where institutional Washington has to be rooting for it to come through,’ said Larry Kamer, a public affairs strategist who worked in the past for GM and Toyota.” [Washington Post, related] Talk about spotting a dangerous defect that needs fixing…

Imagine how much they might have gotten if the cars had actually been suddenly accelerating! “Do We Really Want To Regulate This Way?” asks Daniel Fisher [Forbes] 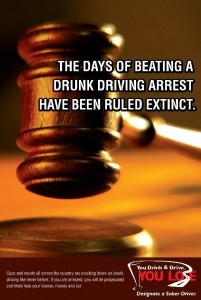 “THE DAYS OF BEATING A DRUNK DRIVING ARREST HAVE BEEN RULED EXTINCT….

“If you are arrested, you will be prosecuted and likely lose your license, money and car.”

As Raised on Hoecakes says:

“Cool, huh? Only one problem: it isn’t true. Someone missed the memo telling judges to make arrests for DUI a resulting conviction 100% of the time.” In Florida, to take one state he says is representative, there were 55,722 DUI tickets and 33,625 DUI convictions in 2011, and although not all cases are closed the same year they begin, the estimated conviction rate still must run closer to 60 percent than 100 percent. Nor is it true that all arrests result in prosecution: prosecutors decline to press some charges where they deem the evidence in hand to be weak, and almost everyone, with the possible exception of certain hosts of TV crime shows, agrees that’s as it should be.

I suppose the generous way to interpret untruths like the ones on this poster would be as a fancier way to say, “Don’t drive drunk, you’ll get caught.” But they also send a rather more disturbing message: “If arrested on DUI and you believe the government’s case against you is weak, better not fight, just take a plea. Because it doesn’t matter how strong your defense is, a judge won’t save you.”

We now know that the panicky tales of electronics-driven sudden acceleration in Toyotas, as urged on the nation by trial lawyer allies like Clarence Ditlow and Joan Claybrook, were sheerest fantasy. That’s no real surprise, since earlier reports of mechanically arising sudden acceleration in Audis and other brands of automobile (also urged on the nation by Ditlow et al.) proved equally imaginary.

But the media never learns, and if they don’t, why should the government? So the National Highway Traffic Safety Administration is proposing a rule that would require all auto designs to include “override” systems which shut off the accelerator if the brake is pressed. This will have no effect at all on typical “sudden acceleration” accidents, which arise from drivers’ hitting the wrong pedal, since those drivers already imagine themselves to be hitting the brake. They will have little if any effect on the extremely rare floor mat entrapment cases in which an accelerator gets trapped in the depressed position, because drivers can already overcome such acceleration by pressing the brake pedal if it is available, while if it is not available because of mats or other obstructions, the efficacy of the override may fall short of what is hoped.

But at least the government will be able to say that it did something.

I did find it interesting in the Washington Post account that Ditlow seems for the moment to have joined the rest of us in agreeing that pedal misapplication is the big cause of these accidents, the better to afford him a vantage point to criticize NHTSA for Not Doing Enough on that front. That’s quite a change from what you hear from him at the height of these panics, when he tends to talk up every possible cause of unwanted acceleration other than driver error. When the next sudden-acceleration panic breaks out, I fully expect CAS to be back pitching the electronics theories again.

P.S. Plaintiff’s lawyer and longtime Overlawyered favorite Steve Berman asserts that there have been “thousands of crashes, hundreds of deaths,” a claim the National Law Journal’s Amanda Bronstad relays without skeptical comment.

I explain at Cato at Liberty.

P.S. Also, welcome listeners from Richmond, Va.’s WRVA, which had me on to discuss these issues this morning. And a retrospective on the Toyota scare from The Truth About Cars’ Edward Niedermeyer.

Filed under: NHTSA, on TV and radio, sudden acceleration, Toyota

The Washington Post — unlike some other newspapers we might think of — doesn’t mind letting its editorial stance catch up with the facts on the ground as they appear to NHTSA staff. We’ve been on the story for quite a while.