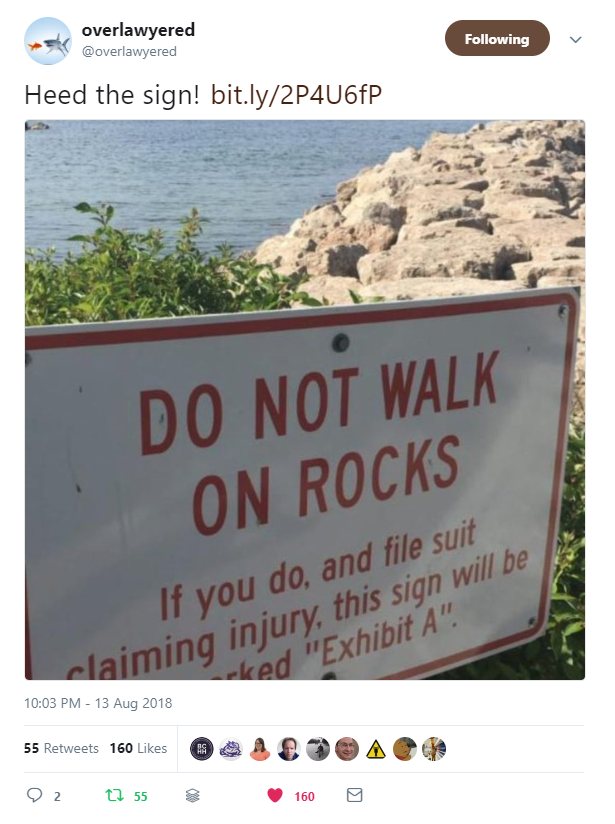 Found this two years ago, near a college dining hall. from r/ScarySigns

Very comprehensive warning/disclaimer sign from the fascinating subreddit /r/ScarySigns, with the caption “Found this two years ago, near a college dining hall.”

You can’t be too careful! @overlawyered pic.twitter.com/5jufzFlasr

Found on a Star Wars light saber toy, “For Accessory Use Only. Not to Be Used as a Battle Device,” and more finalists from the latest Wacky Warning Labels contest. [Bob Dorigo Jones, John Stossel]

“…it should not be used as a pain reliever.” [Bill Childs]

Filed under: Christmas and other holidays, wacky warnings

Bob Dorigo Jones has announced the finalists in the 18th and latest of his series of annual Wacky Warning contests, which document such phenomena as a “Harmful if Swallowed” warning on a hook-laden brass fishing lure. This year’s entries range from the depressing (at a bowling alley: “Bowl at your own risk. Risk of bodily injury is associated with this game.”) to the bizarre (on a small ceiling-mounted smoke alarm: “Silence feature is intended to temporarily silence the horn while you identify and correct the problem. It will not extinguish a fire.”) John Stossel’s studio audience will pick the winner on Friday, July 24. More: Washington Times, and our wacky warnings tag which includes earlier coverage of the series.