A prospective bride feels “miserable and unmoored” as her lawyer advises her to insist on negotiating a term of a pre-nuptial agreement proffered by her intended. Did the lawyer add or subtract value, or was it others’ fault? [Abby Mims, New York Times “Modern Love”; Steve Lubet, Legal Ethics Forum; Debra Cassens Weiss, ABA Journal]

This should qualify for some sort of prize for lawyer online marketing of questionable taste: 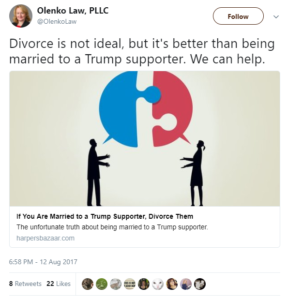 Yes, this is a real, if tongue-in-cheek, ad by a Georgia lawyer. Via Huffington Post a year ago, though it dates back at least a year longer than that.

Filed under: cameras in the courtroom, divorce, Utah

Megan McArdle has some thoughts on the role of changing divorce law among a broader shift of social mores and expectations on marriage, cohabitation, and childbearing in and out of wedlock.

Note, however, that reformers might take an interest in reconsidering the no-fault revolution from many motives other than a simple wish to discourage the rate of divorce across the board. (Contrary to some imaginings, critics of no-fault are a diverse crew, including social scientists, economists, lawyers and judges writing from secular, liberal, and classical-liberal as well as religious-conservative standpoints.) Some see no-fault as deficient in fairness in deciding between the claims of offending and innocent spouses. Some worry that it results in a first-mover advantage in favor of whichever spouse initiates the unraveling of a marriage (by removing assets, for example) and that such an advantage might have destructive effects if not corrected for in some way. And while (as McArdle argues) an expectation of marriage as being a hassle to leave might discourage entry into the institution, it is also possible that an expectation of it as being easily dissolved and lacking in real security might discourage entry by other persons.

“No-fault,” incidentally, may not be the most accurate term for the new system (“unilateral” would be more precise, sometimes combined with “relatively speedy”). While fault as such in contested cases may be kicked out the front door, it very often comes back in through the window in the form of arguments about parental fitness, appropriate asset division and other issues that are still open for argument in court.